In two days, I’ll be back in Buffalo, New York for my very last semester at UB. Before I bid goodbye to America in December, life abroad until now warranties a reality check.

Although there have been many things that have astonished, shocked, bewildered – well you get the idea – my delicate (ahem) late-teenage self, nothing has brought recurring waves of culture shock to my veins more than the following facts. They are bizarre because of the absence of the familiar, because a Malayali girl, brought up in Kerala craves for porotta more than a Subway special; wants to burst crackers for Vishu rather than see fireworks from a distance during Fall Fest.

This is for you Athira, you silly Malayali girl.

In my sophomore year, I was cleaning and carving a pumpkin for Halloween with friends, under the supervision of my lovely roommate Audrey. I happened to mention how people usually work hard to clean and sort out jackfruits in Kerala. Audrey had no idea what I was talking about! It had taken me more than a year and a blank look from her to realize that I’m in a really bizarre place, to which jackfruits are not native…

The beloved chakka growing in our backyards and smelling like sweet fruity rotten flowery rubber, has no existence in America.

During my Study Abroad program in London, I noticed my American friends from UB were baffled when I walked through a Zebra Crossing and the vehicles just stopped. One of them exclaimed “It’s like magic!”

They got used to it later, but the look on their faces was priceless. India being an astute follower of the English system, (you’d be surprised how much of the British we still retain) Zebra Crossings appear even in primary school textbooks here!

I still cannot BELIEVE that I didn’t notice the absence of Zebra Crossings in America! The crosswalks simply exist for crossing while the traffic signal allows pedestrians to walk. What is the point of that, really? More info on Zebra Crossings here and Crosswalks here.

Yes, you can read that again. In my class called Global Realism with Prof. Holstun and some wonderful classmates, someone mentioned how most employees in various states – railway, airline, teachers – are banned from organizing or participating in strikes. I had to blurt out aloud and check if I had heard it right. My surprise seemed to have embarrassed them.

Banning strikes is a surprising concept to me. Socialist thought runs in the veins of many Keralites and we hold our right to enjoy hartals very close indeed! I missed the hartals. Here’s a hilarious article on Kerala’s fascination with strikes. 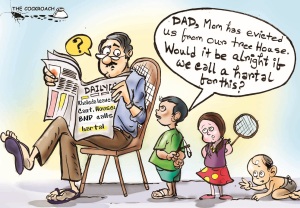 Not that I’m a big fan of unnecessary strikes, but I don’t believe a ban is good either. For more details on strike bans in the US, click here. My naivety denied me from foreseeing this fact, but I should have known the capitalist capital of the world would have some form of control over labor strikes. Oh well.

This is just part one of my pre-college-closure reality check. The next Top Three list will be up soon! Please wish me a jet-lag free week ahead.

ATHIRA UNNI writes, among other things, such as pursuing the perfect amount of sugar to put in her tea. . Her poetry has been published by NAME, Generation Magazine, Brev Spread, Madras Courier, The Sunflower Collective, The Little Rose Magazine, Sheila-Na-Gig Under 30 and Delhi Poetry Slam. View all posts by Athira Unni