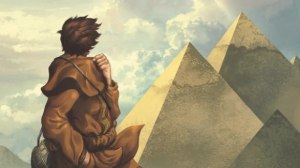 One book had sat untouched in my shelves for more than two years, amidst others that I had read and reread merely to discover new meanings . The book which my best friend had gifted me for my 15th birthday, which I had put away because it had then, made me sleepy.An International Bestseller that I had not read in spite of owning a copy and having heard of its immense success.It might not be a glamorous novel or a great masterpiece of English language but Paulo Coelho’s ‘The Alchemist’ is a feast to a hungry soul.

Day before yesterday, at my Chemistry tuitions, my friend Fathima was gift-wrapping ‘The Alchemist’ for one of her buddies. Well she’s a girl known for her crazy jokes and loud nature. But the fiery power with which she talked about this book made me wonder what was there in that book that created such a response in Fathima. Yesterday, tired of battling with Sumita Arora’s C++ text I decided to take a break . I started reading ‘The Alchemist’- first with scepticism, then curiosity and which later turned to pure wonder.It baffled and impressed me at the same time.To start with, it was a very plainly written book.No big words.No huffy-puffy difficult names for characters.Not even a proper division for chapters!Theology and metaphors governed it’s every page and the book was a bundle of questions that stumps a person at one point or the other in life.In fact, if you remove the philosophical part ‘The Alchemist’ is just an old fairytale of a shepherd and his queer ways, with an awesome climax.But Coelho teaches us about the Soul of the World with the air of a practised priest.It gives you reasons to make sacrifices and tells you to follow instincts.It prods you to love and also to leave your love for the greater good.It advises one to listen to the ‘treacherous’ heart and speaks about deserts and camels, a lot.

“The Alchemist” is indeed a magical story and the child in me cannot help but believe in it.My philosophical self wonders at Coelho’s inexplicable ability to simplify things and my literal self marvels at his saintly words.These 160 pages also left me with a question… Who really was The Alchemist? Is it really the man with the Elixir of Life and The Philosopher’s Stone or is it the young shepherd who learnt to summon the powers and spoke to the Hand of God. If you think it’s the former, think again…

I don’t know anything about ‘omens’ but I could not have chosen a better time to read this book.After Kahlil Gibran’s ‘The Prophet’ , only this book, has been a stimuli that touched the philosophical-receptors in me.My best friend who gifted it to me, knew that I’d like it.However the irony is that I ended up reading it at a time when she needed it more than me…

And to you Fathima, thank you. If it were not for you my encounter with Santiago and Fatima would have occurred much later in life. J

ATHIRA UNNI writes, among other things, such as pursuing the perfect amount of sugar to put in her tea. . Her poetry has been published by NAME, Generation Magazine, Brev Spread, Madras Courier, The Sunflower Collective, The Little Rose Magazine, Sheila-Na-Gig Under 30 and Delhi Poetry Slam. View all posts by Athira Unni